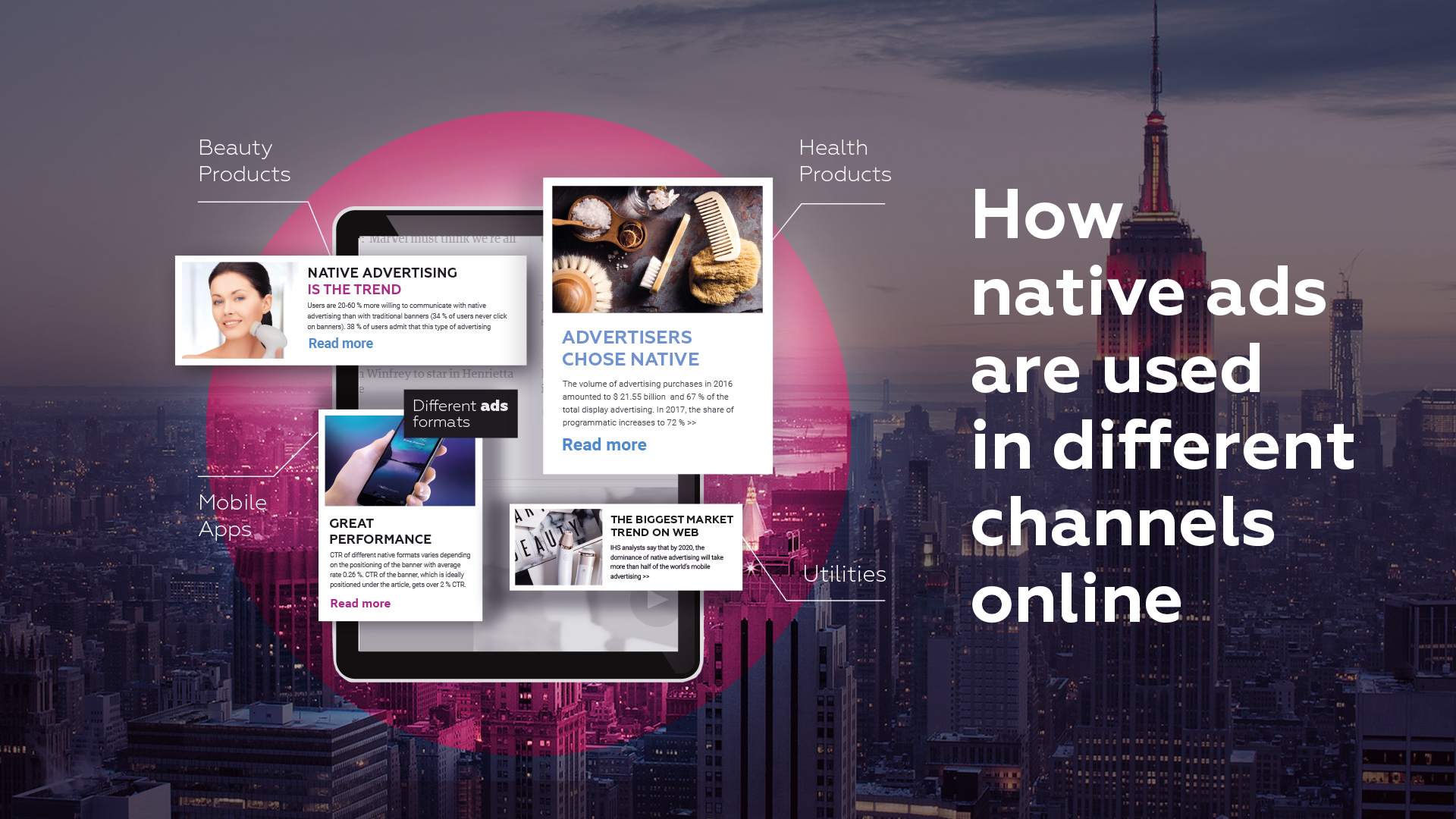 Native advertising in RTB – is a relatively new format of media advertising in the world and an absolute novelty for European and Asian market. During the last years this is a trend №1 in the US which is actively implemented in marketing activities.

According to research of eMarketer.com, in the US the native ad spending reached $ 4.3 billion in 2015. So according to various estimates, RTB advertising in the United States today makes 3% of the total RTB traffic. In Europe native ads are mostly present in social networks and on some websites supporting this format.

The main potential of native advertising is that this format is ready to overcome “banner blindness”. The effectiveness of the classic online marketing decreases. People are tired of advertising and do not pay attention to standard banners or text ads. Due to the fact that native ads are a kind of naturally embedded content, a user does not perceive it as advertising and as a result CTR increases. At the same time, advertisers are also interested in a more natural contact with audience, because spontaneous interest to an advertising message affects conversion rate.

According to the research conducted by IT-lab IPG Media Lab, the viewing duration a of native ad is almost equal to the time of viewing of an original content of the site. Native advertising has a positive effect on the growth of purchase intent and increases brand recognition. It also doubles the number of people willing to share information about a promoted product with friends and family.

Using native ad campaigns in RTB opens fundamentally new opportunities for advertisers because it allows you to show your ads on many sites at once. Such an advertisement provides a significant coverage and reduction of marketing spendings. An important factor is that native ads placement is strictly “contextual”: its format is the one the visitor expects to see on a particular site. Thus, the announcement of the sale of cars will not be displayed in the “10 tips for pregnant women” section, so only potentially interested audience will see it.

According to data obtained through the analysis of advertising campaigns conducted by GetIntent platform in the United States the use of native advertising in the RTB may increase banners viewability by 50%, and improve CTR three times compared to classic media advertising formats.

Despite the fact that native ad market is still emerging, many experts already recognize it as an independent form of advertising. Social media have been using certain types of native advertising for a long time. For example in Facebook you can make promoted posts which will be organically embedded in the news feed timeline. It’s a native advertising in a user-friendly environment. Ads look like just a normal post in FB timeline, so such advertising is potentially interesting to a user. Sometimes native advertising looks so organically, that a user can not immediately identify it as an advertisement. Before this format appeared in FB media banners were placed outside the news feed timeline. According to FB advertisers’ point of view CTR has increased several times since native ads had started to be used in advertising campaigns. A similar format is used today by other resources, such as Twitter, LinkedIn, Instagram, YouTube.

Native advertising in the media

Some media begun to use the simplified format of native ads earlier. One of the ancestors of native advertising was advertorial. This is a standard article in media, which has been created for a specific customer and contains a piece of promotional information. The style and layout are adapted to the content of the platform. It is usually located on one of its inner pages.

The next step in the development of native advertising was the emergence of new options in displaying ads organically embedded in the content. Such advertising may look like an ordinary news announcement or an announcement of an article. In style, form and language, it will exactly copy edition style. The only difference from editorial content is that when you click on an announcement your are driven not to the internal page of the site, but to the external page of the advertiser. A mark “sponsored” is  required next to such an advertising.